We have all heard the expression "kids don't come with instructions" and it's so true -- they don't.

And when teens become parents they are not emotionally mature enough to handle parenthood.

How is a parent to know if their teens are sexually active? If they are ... are they taking precautions?

Now, parents can learn The Real Truth about Teens and Sex.

Sabrina Weil, former Editor-in-Chief of Seventeen Magazine partnered with The National Campaign to Prevent Teen Pregnancy to produce a national survey of 1059 teens age 12-17, which was fielded by a leading international market research agency.

The results are revealed for the first time in The Real Truth about Teens and Sex. The book also includes excerpts from some of the hundreds of interviews conducted with teens on this topic.

The book features exclusive survey results and candid interviews with young people, advice from experts, and Weill’s own savvy insights. According to Weill, "this engaging, eye-opening and practical book will help bridge the gap between teens and the adults who care about them, guiding young people to smart, responsible decisions.”

This book is a great tool for parents to learn about their teens sexual activity and how to keep them from becoming teen parents.

Sabrina Weill is the former editor-in-chief and current special projects director of Seventeen magazine. She was instrumental in the launch of CosmoGIRL! magazine where she served as founding executive editor for 4 years. She has also held editorial positions at Redbook and has served as editor of the Scholastic teen health magazines Choices.

Sabrina is the author of The Seventeen Guide to Sex and Your Body (Simon & Schuster 1996) and We’re Not Monsters: Teens Speak Out About Teens in Trouble (Harper Collins 2001). She has a BA in Creative Writing from the University of California at Santa Cruz. 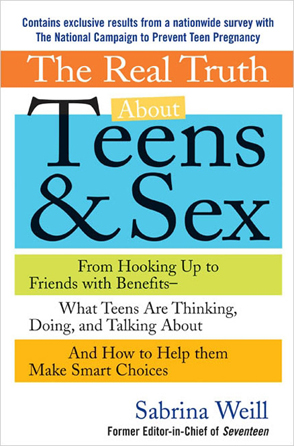